I've used Freeway for many years and coped with it for my needs but now I need to move on. I've tried various software and find them very easy to cope with, with one exception. Xway. It's not exactly WYSIWYG is it? I'm no computer geek but can normally find my way round software after a few trials and errors, but congratuations, I'm stuped with this.
Even the simplest things I'm struggling with. I want to add what you call (I think) a child box or boxes, because I want to have images and text in four columns across the page. I found one thread that seems to explain that but it starts by simply saying add child boxes. but how??? I've looked in both the reference manual and the tutorial. Am I missing something?
Help would be much appreciated, failing which I'll simply use someone else's software and save my brain from exploding.

Daruddle,
Don’t give up. Xway is extremely capable and stable even as beta software. I had the same issue as you but it is actually very simple. Click in the box into which you want to add a child box, then add a new box. The new box will be a child of the box in which you clicked.

The concept of parent boxes and child boxes is explained on pages 23 and 35 of the User Guide for Xway b4. A child box (in Xway or Freeway) is just a box that is inside another box (its parent).

Adding images and boxes in columns across a page is something of an advanced technique. You could do it easily in Freeway because Freeway used an old layout method called table layout (invisible tables). Table layout has been deprecated for many years because of accessibility issues, and it also tends to create inflexible websites that don't display well on mobile devices. Xway creates flexible CSS layouts that work on different devices (desktops, tablets, mobiles). There is a CSS property called flexbox that can be used for multi-column layouts. Xway will support this directly in a future version, but you can also add it manually (for now) via Extended Properties.

I did find that instruction but when I click on a box (so that handles appear) then click on insert box, that second box appears immediately underneath the first box. (See attached screen grab) so I assumed I was missing something. which I obviously am, but what? 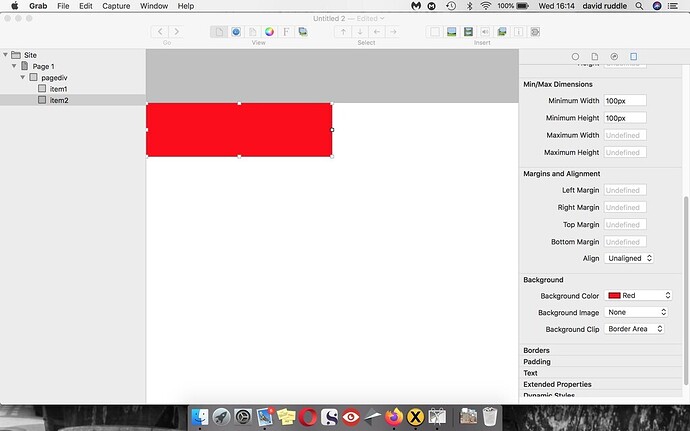 Hi
As I say above when I click on a box to disply the handles then on insert box the new box simply appears below the first.

Ah! The eureka moment! One needs to double click! Right so that's the first part now on to extended properties. I think I saw a thread on that so I'll see where that leads.

That was premature! I can now add a single child but cant seem to add any more.

Sorry, I'm obviously dim, what's the difference given we are looking at a 2 dimensial object?

It’s a matter of hierarchy. A child (nested) object occupies space within another object, and can influence its peers within that space. It’s like subway cars. The people on the platform don’t budge the people in the car in any direction, and vice-versa.

In Freeway, you could put two things “next” to each other using absolute positioning. They were in no way next to each other in the sense that moving one would move the other. They wouldn’t collide, rather one would appear to slide under the other. So if the window size changed, they could not rearrange or flow.

In-flow peers push each other out of the way if needed.

Sorry, I'm obviously dim, what's the difference given we are looking at a 2 dimensial object?

What you're missing is the context of your selection. When you want to insert an item into another item, you need to get a flashing text cursor inside the parent object. When you click on an item, you have directly selected it. Think of it like text. If you have selected a word versus if you see the cursor flashing between two words. Insert has a different meaning in these cases.

How to insert a box is described at the start of "Chapter 4: Boxes" in the Xway User Guide. It's also covered by the Xway Tutorial.